Posted by RavinderSanjay at 6:16 PM No comments: 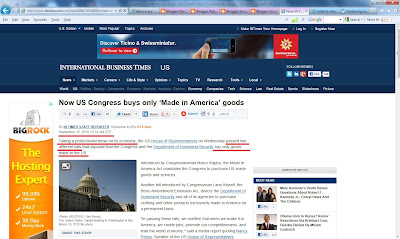 200 tonnes of silver seized from sunken ship from India

PTI | Sep 27, 2011, 06.59AM IST
LONDON: In one of the largest shipwreck hauls, nearly £150 million worth of silver has been found on a British ship that was travelling from India but was sunk by a German U-boat in the Atlantic in 1941. The wreck of SS Gairsoppa has been found to contain 200 tonnes of silver by the American exploration company, Odyssey Marine, which will keep 80% of the cargo's value according to a contract with the department of transport.


Only one person from the 85-strong crew survived the torpedo attack as the aging steamer tried to reach Ireland, according to the BBC. The ship was on its way back to Britain from India when it ran low on fuel in stormy weather, and tried to divert to Galway harbour, but it was spotted and sunk by the German submarine.


The wreck of the 412ft ship was found this summer nearly 4,700m below the North Atlantic, 300 miles off the Irish coast, but it was only confirmed as SS Gairsoppa last week. Work to recover the cargo will begin in the second quarter of 2012, Odyssey Marine's senior project manager Andrew Craig said.
Sources:
http://timesofindia.indiatimes.com/india/200-tonnes-of-silver-seized-from-sunken-ship-from-India/articleshow/10134924.cms

Ladder leading to the forecastle deck of the SS Gairsoppa. Courtesy: Odyssey Marine Exploration, Inc.
It was a stormy Second World War night when, on February 17, 1941, three lifeboats abandoned the SS Gairsoppa, a 412 foot-long British cargo ship en route from India to Liverpool, England.
In service of the Ministry of War Transport, the Gairsoppa was laden with tea, iron and tons of silver. Because of bad weather and insufficient coal, she was forced to break away from the military convoy off the coast of Ireland.
BLOG: Sunken Treasure Found in the Seas Of Sicily
As the captain re-routed in emergency for Galway, on the west coast of Ireland, the merchant steamship and its crew of 86 men were hit by a torpedo from a Nazi U-boat. She sank in icy seas within 20 minutes.
Left at the mercy of the winds and waves, two lifeboats soon disappeared. A third boat managed to sail for 13 days, with only one person, second officer Richard Ayres, surviving the long journey to shore.

An intact toilet sits on the bridge deck of the SS Gairsoppa. Courtesy: Odyssey Marine Exploration, Inc.
Now, 70 years after the dramatic sinking, treasure hunters have announced the discovery of the Gairsoppa's intact wreck about 300 miles off the coast of Ireland, at a depth of nearly three miles.
Laying deeper than the Titanic, the wreck is believed to hold the largest haul of precious metal lost at sea.
BLOG: 'Black Swan' Bounty Deal Revealed in Wikileaks Cables
According to U.S. underwater archaeology and salvage company Odyssey Marine Exploration Inc, up to 240 tons of silver, valued at more than $200 million, could be retrieved by next spring.
"We've accomplished the first phase of this project -- the location and identification of the target shipwreck -- and now we're hard at work planning for the recovery phase," Andrew Craig, Odyssey Senior Project Manager, said in a statement.

The stern compass discovered on the SS Gairsoppa. Courtesy: Odyssey Marine Exploration, Inc.
The wreck was found with the help of an underwater robot which took three and a half hours to descend to the bottom of the Atlantic Ocean.
The robot-captured video footage showed a unique view into the rusty ship, revealing a ladder leading to the forecastle deck, a stern compass, and even an intact toilet.
The torpedo hole in the hull, which featured the red-and-black colors used by the British Indian Steam Navigation Company, was also clearly visible.
Although none of the precious metal was filmed, Odyssey is confident that it is still there.
BLOG: Roman Shipwreck Full of Wine Jars Found
Indeed, video footage showed tea chests, which were reported to have been on board. The account indicated that the Gairsoppa carried 2600 tons of pig iron, 1765 tons of tea, 2369 tons of general cargo and 200 tons of silver ingots and coins.
"We were fortunate to find the shipwreck sitting upright, with the holds open and easily accessible. This should enable us to unload cargo through the hatches as would happen with a floating ship alongside a cargo terminal," Greg Stemm, Odyssey CEO, said.
The company was awarded an exclusive salvage contract by the British government in 2010. Under the agreement, Odyssey will retain 80 percent of the silver's value.

Posted by RavinderSanjay at 12:08 AM No comments:

Cold drink is not good for health

In 2003, the Centre for Science and Environment (CSE),[11][12] a non-governmental organisation in New Delhi, said aerated waters produced by soft drinks manufacturers in India, including multinational giants PepsiCo and Coca-Cola, contained toxins including lindane, DDT, malathion and chlorpyrifos — pesticides that can contribute to cancer and a breakdown of the immune system. Tested products included Coke, Pepsi, and several other soft drinks (7Up, Mirinda, Fanta, Thums Up, Limca, Sprite), many produced by The Coca-Cola Company.
CSE found that the Indian produced Pepsi's soft drink products had 36 times the level of pesticide residues permitted under European Union regulations; Coca Cola's 30 times. CSE said it had tested the same products in the US and found no such residues.
Coca-Cola and PepsiCo angrily denied allegations that their products manufactured in India contained toxin levels far above the norms permitted in the developed world. David Cox, Coke's Hong Kong-based communications director for Asia, accused Sunita Narain, CSE's director, of "brandjacking" — using Coke's brand name to draw attention to her campaign against pesticides. Narain defended CSE's actions by describing them as a natural follow-up to a previous study it did on bottled water.[13]
In 2004, an Indian parliamentary committee backed up CSE's findings, and a government-appointed committee was tasked with developing the world's first pesticide standards for soft drinks. Coke and PepsiCo oppose the move, arguing that lab tests aren't reliable enough to detect minute traces of pesticides in complex drinks like soda.
The Coca-Cola Company has responded that its plants filter water to remove potential contaminants and that its products are tested for pesticides and must meet minimum health standards before they are distributed.[14]
Coca-Cola had registered a 11 percent drop in sales after the pesticide allegations were made in 2003.[15]
As of 2005, Coke and Pepsi together hold 95% market share of soft-drink sales in India.[13]
In 2006, the Indian state of Kerala banned the sale and production of Coca-Cola, along with other soft drinks, due to concerns of high levels of pesticide residue[16] On Friday, September 22, 2006, the High Court in Kerala overturned the Kerala ban ruling that only the federal government can ban food products.[17]
Source: http://en.wikipedia.org/wiki/Criticism_of_Coca-Cola

An ingredient used in Coca-Cola and Pepsi is a cancer risk and should be banned, an influential lobby group has claimed.
The concerns relate to an artificial brown colouring agent that the researchers say could be causing thousands of cancers.
‘The caramel colouring used in Coca-Cola, Pepsi, and other foods is contaminated with two cancer-causing chemicals and should be banned,’ said the Center for Science in the Public Interest (CSPI), a health lobby group based in Washington, DC.
‘In contrast to the caramel one might make at home by melting sugar in a saucepan, the artificial brown colouring in colas and some other products is made by reacting sugars with ammonia and sulphites under high pressure and temperatures.
‘Chemical reactions result in the formation of two substances known as 2-MI and 4-MI which in government-conducted studies caused lung, liver, or thyroid cancer or leukaemia in laboratory mice or rats.’
America’s National Toxicology Program says that there is ‘clear evidence’ that both 2-MI and 4-MI are animal carcinogens, and therefore likely to pose a risk to humans.
Researchers at the University of California, Davis, found significant levels of 4-MI in five brands of cola.
Read more: http://www.dailymail.co.uk/health/article-1357787/Coca-cola-Pepsi-ingredient-cancer-risk-Call-ban-colouring-agent.html#ixzz1Ub1yo5Fg

Photo Credit: Jorge Bach, CSPI
A few days ago it was revealed that diet soda can trigger strokes in regular drinkers of the sweet fizzy beverages. Now the Center for Science in the Public Interest is petitioning the U.S. Food and Drug Administration to prohibit what it says is carcinogenic “caramel coloring” (that is, not real caramel but synthetic, chemical “caramel”):

The “caramel coloring” used in Coca-Cola, Pepsi, and other foods is contaminated with two cancer-causing chemicals and should be banned, according to a regulatory petition filed today by the Center for Science in the Public Interest.
In contrast to the caramel one might make at home by melting sugar in a saucepan, the artificial brown coloring in colas and some other products is made by reacting sugars with ammonia and sulfites under high pressure and temperatures. Chemical reactions result in the formation of 2-methylimidazole and 4 methylimidazole, which in government-conducted studies caused lung, liver, or thyroid cancer or leukemia in laboratory mice or rats.
The National Toxicology Program, the division of the National Institute of Environmental Health Sciences that conducted the animal studies, said that there is “clear evidence” that both 2-MI and 4-MI are animal carcinogens. Chemicals that cause cancer in animals are considered to pose cancer threats to humans. Researchers at the University of California, Davis, found significant levels of 4-MI in five brands of cola.
“Carcinogenic colorings have no place in the food supply, especially considering that their only function is a cosmetic one,” said CSPI executive director Michael F. Jacobson. “The FDA should act quickly to revoke its approval of caramel colorings made with ammonia.”
Federal regulations distinguish among four types of caramel coloring, two of which are produced with ammonia and two without it. CSPI wants the Food and Drug Administration to prohibit the two made with ammonia. The type used in colas and other dark soft drinks is known as Caramel IV, or ammonia sulfite process caramel. Caramel III, which is produced with ammonia but not sulfites, is sometimes used in beer, soy sauce, and other foods.
Five prominent experts on animal carcinogenesis, including several who have worked at the National Toxicology Program, joined CSPI in calling on the FDA to bar the use of caramel colorings made with an ammonia process. “The American public should not be exposed to any cancer risk whatsoever as a result of consuming such chemicals, especially when they serve a non-essential, cosmetic purpose,” the scientists wrote in a letter to FDA Commissioner Margaret Hamburg.
CSPI also says the phrase “caramel coloring” is misleading when used to describe colorings made with ammonia or sulfite. The terms “ammonia process caramel” or “ammonia sulfite process caramel” would be more accurate, and companies should not be allowed to label any products that contain such colorings as “natural,” according to the group.
“Most people would interpret ‘caramel coloring’ to mean ‘colored with caramel,’ but this particular ingredient has little in common with ordinary caramel or caramel candy,” Jacobson said. “It’s a concentrated dark brown mixture of chemicals that simply does not occur in nature. Regular caramel isn’t healthful, but at least it is not tainted with carcinogens.”
In a little-noticed regulatory proceeding in California, state health officials have added 4 MI to the state’s list of “chemicals known to the state to cause cancer.”…

Posted by RavinderSanjay at 8:39 PM 5 comments:

another link for the same book

Posted by RavinderSanjay at 2:44 AM No comments:


Volume I
Indian Science and Technology in the Eighteenth Century